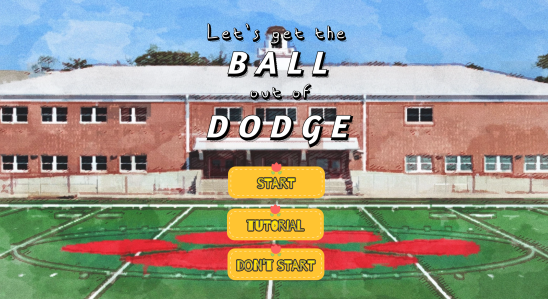 Let’s Get the Ball Out of Dodge is real-time, positional game based loosely on children playing dodgeball. We wanted to make a casual-feeling party game that was still systemic and had strategic elements. The game is played on a single computer and keyboard, but with two players. The matches are fast and reset easily, so multiple rounds can be played quite quickly, and the time to get back into a rematch is short. Each of these elements were design decisions to reinforce the nature of the game.

At the beginning of the game two players start with the same amount of currency to spend on their rosters and pick kids for their team. Each kid has a cost and an ability, and various matchups with the other kids (some hard counter each other, some only counter each other positionally, some are based on deployment timing, etc). Because players take turns picking kids, each player has strategic information based on the previous known picks of the opponent. Each player picks until they cannot afford any more kids, or until they choose to enter the fight stage.

At the fight stage, players place kids in lanes using the number keys and the kids move forward, executing throws/catches whenever they come in range of another kid or moving ball. The winner is decided by which player gets more kids to the opponent’s end zone once all the kids have been deployed. Kids are eliminated when they are hit by a dodgeball, their throw is caught by a catcher, or a runner collides with them. There are both timing and positional components to this system, as the players must consider the kids deployed by their opponents, and how to counter them, but also deploy their own kids quickly to prevent opposing kids from making it to the end zone. Observing and countering your opponents formation is the best strategy for victory.